How is the Waterjet Abrasive Recycling Dispenser, or WARD, challenging traditional heat cutting territory? By recycling the most expensive component in abrasive waterjet cutting - the garnet - waterjet cutting is now more competitive with oxyfuel, plasma and laser. With operating costs plummeting dramatically for the first time since the introduction of the long life nozzle, waterjets are now able to cut parts without the disadvantages associated with heat cutting.

Cutting metals with heat has five disadvantages. The first is the creation of a heat-affected zone along the cut edge of the metal. This sometimes requires removal. When secondary machining is necessary, the localized hardening of the heat-affected zone can at times cause tool bits significant wear and tear. Second, the large start-up holes associated with heat cutting often mar the material. Third, sheets of metal normally cannot be stacked during cutting.

This occurs with plasma because the metal must remain grounded during the cut. Fourth, a certain amount of space must remain between parts cut from the same piece of metal. During plasma cutting, one side of the kerf is left beveled. This part of the material must often be discarded, wasting expensive materials. The thicker materials are cut with a wider kerf, which demands a greater distance between nested parts. Fifth and finally, the operator must wear heat-resistant clothing and a welding mask and maintain a safe distance during cutting. Approximately one half of plasma cutting is performed under water to diminish the noise, pierce splatter, arc glare and temperature of the part after cutting. 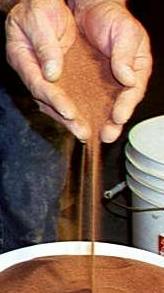 The recycled abrasive is as good as new 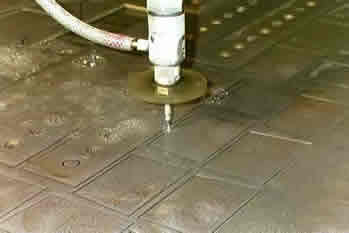 Another potential hazard associated with plasma cutting involves aluminum. As the plasma cuts through the aluminum sheet, the water is level with the underside of the metal. Hydrogen builds up between the water and the aluminum sheet, which must be released by removing the sheet or lowering the water level in the tank If the operator forgets to do this, the start-up spark the following day will cause an explosion.

During heat cutting, gases are the consumables; it is impossible to recycle the burned gases. The costs of gases used in oxyfuel, plasma and laser will continue to be an integral expenditure in heat cutting.

With abrasive waterjet cutting, the consumable is the abrasive. Traditionally, waterjet operators have incurred great expense for the purchase, removal and disposal of the sludge produced during abrasive waterjet cutting. The sludge is comprised of the used abrasive, water, particles of the cut material and other impurities. With the advent of abrasive recycling, operators are now able to recycle up to 70% of their garnet, saving literally thousands of dollars. The WARD removes the sludge from the water tank, thereby lowering removal costs and the downtime associated with stopping the waterjet's operation in order to clean the tank. This halt to production can easily last four hours or more, which can prove quite costly.

What is Waterjet Cutting?

Imagine thousands of minuscule, red, glassy mineral particles, entrained in a fine stream of H2O, exploding from an opening no larger than a human hair at thousands of miles per hour. In their forward propulsion, the gem-like particles erode the material, leaving some of them smaller than at the beginning of their journey. These tiny grains shave off particles of the material being eroded, leaving a swath of empty space in their wake. The shaved-off particles fall together with the garnet into a large water tank. The erosion process is violent, but anyone observing this phenomenon would be able to approach the erosion point with no more than a fine mist on their protective eyewear.

This controlled erosion process, utilizing an abrasive (typically garnet), allows virtually all materials known to be cut with ease. Water is forced through an orifice .003 inch to .016 inch in diameter, exiting at a speed of 2,000 miles per hour. The water pressure can be anywhere from 20,000 to 60,000 psi. The abrasive is drawn into the stream of water by a vacuum created through the venturi effect. A waterjet is able to cut at speeds from .05 inch per minute to 600 inches per minute and hold tolerances up to +/- .003 inch, depending upon the material being cut and the quality of cut desired. The slower the speed, the less striations appear on the piece being cut. Ramping is used in the computer program to modify cutting speeds at corners and arcs, ensuring a consistent, quality edge finish. Edge quality is defined with the numbers Q1 through Q5, with Q1 being a poorer finish requiring force to separate the parts and a Q5 a superior finish.

Waterjets also have excellent piercing abilities. For example, waterjets can drill a hole in 1 1/4-inch titanium in just over three seconds. Non-ferrous materials cannot be cut using plasma, since they are not able to conduct electricity. This is not a problem with waterjet cutting, however. 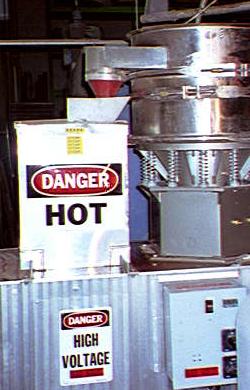 The high cost of abrasive prohibits some waterjet job shops from keeping their cutting prices competitive on certain materials, but the WARD has changed that. By recycling the abrasive, the operator is able to reuse a percentage of the original batch, thus saving thousands of dollars monthly on new abrasive. For example, a single-head, abrasive waterjet with a 100 hp pump operating nine hours per day could save approximately $8,000 per month! How is this possible? How can the mixture of used abrasive, cut particles, water and other impurities (sludge) be recycled?

The operation of the WARD is quite simple, yet it has taken years of research to perfect and patent it. The sludge is removed from the water tank with a patented nozzle which contains no moving parts. It is then pumped to the top of the unit, where it is sifted through a series of vibrating screens, washed and separated into waste product and reusable abrasive. All abrasive larger than 100 mesh is then dried and collected in a hopper, ready for immediate reuse or to be mixed with new abrasive at the desired ratio. Operators have discovered that sometimes the recycled abrasive cuts faster and cleaner than new abrasive, since all the impurities have been screened out in the WARD. The apparent explanation for this is that some new abrasives contain impurities such as feldspar. Once the new abrasive has been used for cutting, the softer impurities tend to be broken down more quickly, leaving a higher percentage of garnet in the recycled abrasive.

Any company in the market for a laser, plasma or oxyfuel system should also consider abrasive waterjet technology. It is possible to purchase a waterjet/plasma combination as standard, offering the best of both worlds. One manufacturer produces gantries with separate carriages for the waterjet and plasma cutting heads, allowing for independent movement via software programming. The same OEM offers routers, optical tracing eyes, and remote and infrared, hand-held pendants as standard options. The improvements in waterjet systems continue to simplify the usage of this advanced, yet practical technology with infinite capabilities.